The sights of Piraeus 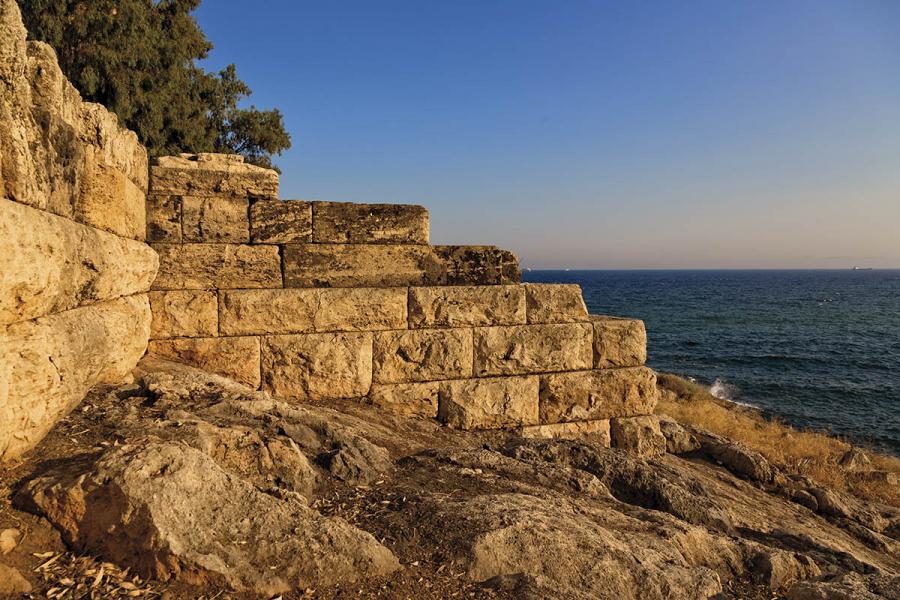 The walls and gates of ancient Piraeus. The ruins of the fortifications are in good condition to this day. In 493 BC. Themistocles began the construction of fortifications around Piraeus. The two main gates of the fortifications are located at the entrance of the modern city on 34th Syntagma Street. Asteos Gate is the westernmost gate, which is enclosed by Pylis, Omiridou, Skylitsi, and Kolokotroni streets. The main road for transport to Athens passed through the Gate of Asteos.
The Long Walls and the Middle Gate. The purpose of the construction of the Long Walls was the connection of Athens with its port. The Long Walls (North, Faliriko, and the Middle or South wall) created a safe corridor between Athens and Piraeus for the population of Attica during the Peloponnesian War. The Middle Gate, near the Gate of Asteos, is very similar to the Dipylon of Athens, but smaller. It was built for traffic using the Long Wall Corridor. The Annual Gate is located on the north side of the main port, Kantharos, in the area of ​​Drapetsona. The fortress of Hetionia was built in order to control the port. Two parts of the wall start from this gate. The first to the east towards the port. The second to the outside port. Two strong circular towers of the Hellenistic period stood on the sides of the gate. The wall is protected by a deep trench dug into the rock.
The coastal sector of fortifications. It was built by Conon in 394 BC. and is preserved, to this day, as a section of 2.5 km along the Piraeus Coast. Many of the wall towers are preserved to this day. 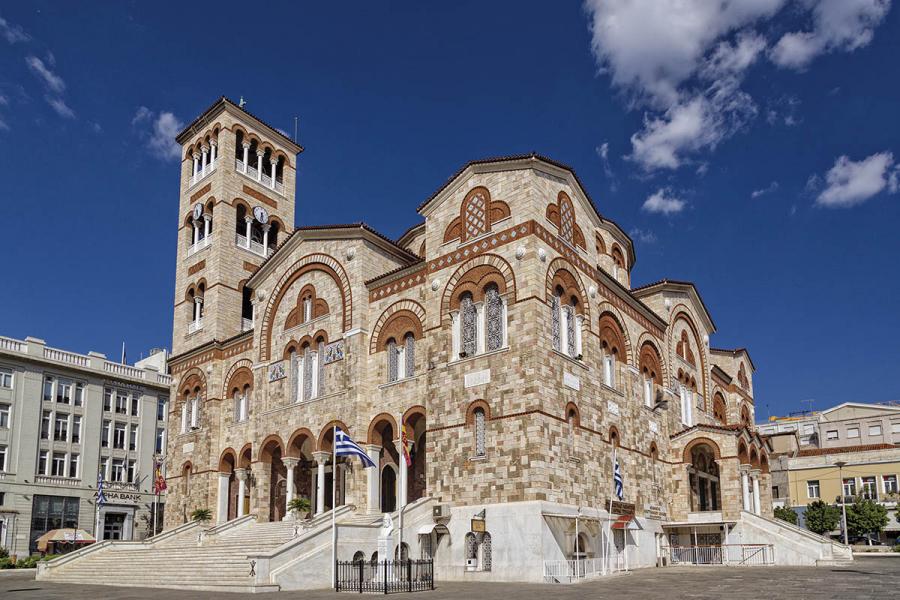 CATHEDRAL OF THE HOLY TRINITY. It was built in 1964 on the site of an older church. It follows Byzantine architectural standards, has an internal area of ​​835 sq.m. and its dome rests on 8 cruciform arches and an equal number of arches. Its external doors are made of wrought brass of a special style and its ornate iconostasis is made of marble. The church was narrated by the hagiographer St. Almaliotis and his student A. Liakos. It is located at number 2 of Ethnikis Antistaseos Street at its junction with Vassileos Georgiou Street.

SAINT NICHOLAS. It was built at the end of the 19th century. in designs by I. Lazarimos, the architect who also designed the Municipal Theater. It is an impressive orthodox church of neoclassical style. It is located directly opposite the PPA exhibition center and the Customs, at 1 Agiou Nikolaou Street.

ST. SPYRIDON. In the place where today is the holy church of Agios Spyridon there was a Byzantine monastery of the 11th century. In April 1827, the chief of Roumeli, George Karaiskakis, together with a war corps of European Philhellenes, attacked the monastery in which the men of Kioutachi Pasha had been fortified. Eventually, after heavy artillery fire from land and sea, they captured it. This was the last battle for the liberation of Piraeus from the Turks. The current church was built in 1875. It is located on Akti Miaouli 1.

CATHOLIC CHURCH OF SAINT PAUL. The plans for the cathedral dedicated to the Apostle Paul were made by the architect Eduard Schaubert in 1838 and supervised by Hansen and Lorenzen. It was completed in December 1839 and the official inauguration took place in November 1840. The existence of the church gave the impetus for the operation of catholic schools in Piraeus from 1859 onwards. The church was rebuilt in 1896 and in 1971 it was expanded as two side aisles were added to its central part. It is located at 23 Filonos Street.

PROPHET ILIAS KASTELLAS. It is famous for its location at the highest point of the hill of Kastela and a very popular temple in Piraeus for the performance of mysteries due to its prestigious location. In the past, in the place of Profitis Ilias, there was a chapel, part of the monastery of Agios Spyridon, but it was destroyed by an earthquake. In 1986, the current three-aisled basilica was built in its place, which was painted by Piraeus painters.

ST. CATHERINE. The church in Alexandra Square literally hides an incredible story. According to her, the original chapel was built by an Italian named Vicenzo Caivano in honor of Catherine’s wife when she died in 1934. In the church, which operated three years later, Vincent asked the workers to build a underground crypt, where he placed his wife’s remains, in a bronze coffin, with glass so that her face could be seen. From then on, the Italian husband spent endless hours in the crypt mourning his lost Katerina. As it turned out, however, this was not the only reason for his isolation. On the eve of the war between Italy and Greece, the British counterintelligence found encrypted messages coming from the area where the church is located. With the help of radiometers, the Greek authorities found that they were broadcast by St. Catherine and while researching the crypt area, they discovered a transmitter – and in fact high technology for the time! The broken husband was arrested on charges of espionage. His name, however, was retained in the chapel of St. Catherine, which bears the name of St. Vincent…

SANTA CLAUS. The original small church was built in 1873, in the then deserted area of ​​Freattida, by a municipal messenger, Vassilis Georgakakos, who aspired to become a nun. With a focus on the church, large villas were built during the following years. After the death of Georgakakos, the Municipality in 1899 decided on the site of the small church to build a much larger and more impressive church, in Byzantine style, to stand out at the top of the hill. The inauguration took place in November 1909, nine full years since its construction began, and after the church went through various adventures and financial alleys…

CHURCH OF SAINTS KONSTANTINOS AND ELENIS. It is located in Korai Square and was founded on the plans of Ioannis Lazarimos (signed by the Municipal Theater of Piraeus and other remarkable buildings of the city), in July 1878. It is considered one of the largest in Piraeus. In 1934, the first dormitory of the Night High School of the city operated inside the church, while it became the cathedral of Piraeus when the Holy Trinity was destroyed by the bombings of January 1944.

AGIA PARASKEVI NEA KALLIPOLIS. It was inaugurated in October 1940, in the area of ​​Nea Gallipoli and here in 1946 the later archbishop and president of the Cypriot Church exercised his priestly duties. 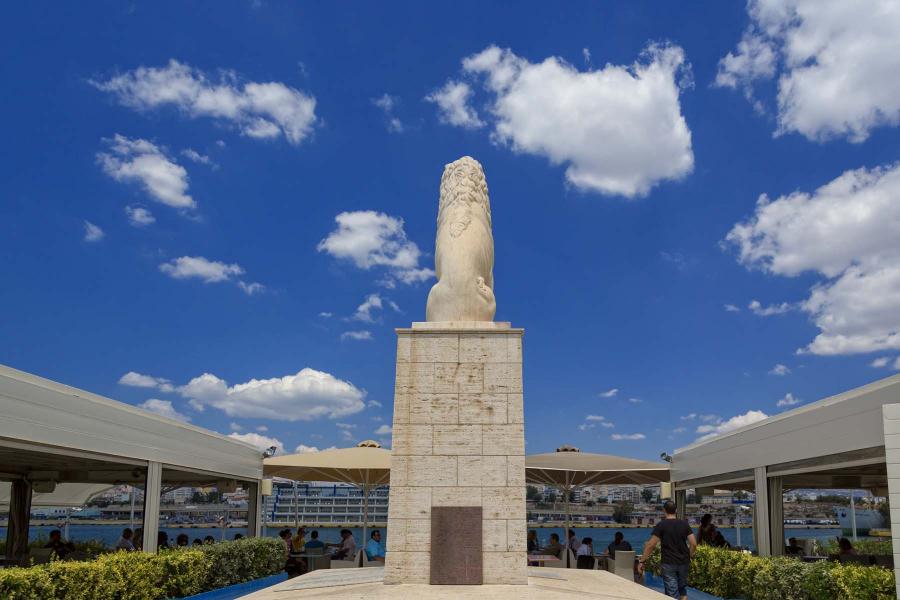 The lion that dominates today at the end of the Xaveri Coast looking towards the main port, is an exact copy of an older marble statue stolen by the Venetian admiral Morosini in 1687. The original stolen dominated for centuries in a prominent position of the port that Piraeus in the Middle Ages was called Porto Leone by the Latins and Aslan Liman by the Ottomans. Archaeologists have not reached a definite conclusion as to the date of construction of the original lion, but it is very similar to the trophy set by the Macedonians in Chaeronea. However, neither Pausanias nor Strabo mention it. Runic symbols have been engraved on his body – certainly later – for which there is no specific information. It is said that they were engraved by Varangian mercenaries, ie Scandinavian soldiers, who were found in Piraeus in 1018 with the company of the Byzantine emperor Basil II the Bulgarian. 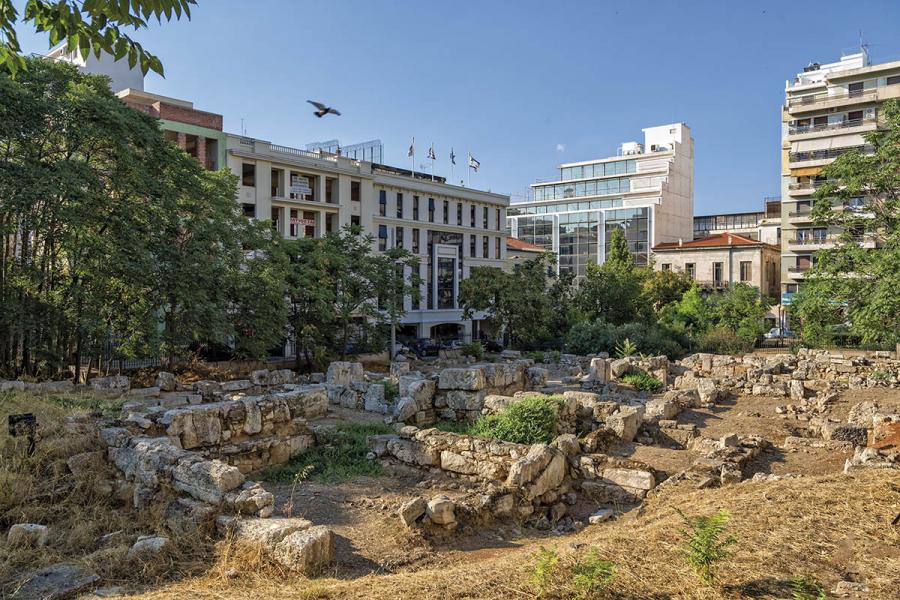 THE NEOSOIKI. This was the name of the sheltered coastal facilities for the maintenance and repair of the triremes of the Athenian fleet, which had to always be militant in order for Athens to maintain its maritime sovereignty. Hundreds of craftsmen and countless slaves were employed in the 196 new settlements in the port of Zea. One can observe the remains of new settlers on the foundations of two neighboring buildings on the east side of the Moutsopoulou Coast. Specifically, in the building block defined by Thrasyvoulou Street, Sirangiou Street, and Akti Moutsopoulou.

TUNNEL. It is also called the cave of Paraskeva and is located between Mikrolimanos and Zea, at the end of the parking lot for Votsalakia beach. In ancient times the place was sacred, dedicated to the local hero Tunnel who is probably identified with Glafkos, son of Poseidon and the nymph Naida. In Roman times the cave functioned as a bath. At its entrance was found a mosaic with the representation of a young man driving a four-wheeled chariot.

FILONOS POTTERY. It was the largest building in Piraeus in antiquity. Its construction began in 346 BC. and was completed in 330 BC. An extraordinary contribution of 10 golden talents was imposed by the state on every wealthy Athenian citizen. She owes her name to the architect Filonas. It was 135 meters long and 18 meters wide, while inside it was divided into three aisles with rows of Ionic columns. Sails, masts, life jackets, ropes, and ammunition were kept inside the building to supply more than 200 triremes. The Ark of Philo was leveled in 86 BC. by the Roman legions.

ROMAN ANTIQUITIES TERPSITHEAS. In the building block defined by Iroon Polytechniou, Skouze, Leosthenous, and Filellinon streets, antiquities from the Roman period were found at a shallow depth. The site was intended for the construction of a school, but in 1981 the archeological dig brought to light the ruins of Roman houses.